At 23:56, Thursday evening 17-March, Colleton County (SC) Fire-Rescue units were sent to the 100 block of Gadsden Loop for a structure fire with entrapment. On arrival, Car 118 found a single-story brick veneer dwelling well-involved with fire coming from the roof, front windows, and door. A 24-year-old occupant advised she was on the front porch when she heard a loud pop inside the home. When she went to investigate, the power was off and she found smoke banked about four feet from the floor. She made an attempt to reach a 59-year-old female in a back bedroom, but was driven out by the heat and smoke. She ran down the street to get help and she returned with her uncle. The two attempted a second time to reach the woman inside but were unsuccessful due to the increased fire and smoke. They broke some windows, then alerted 9-1-1.

Firefighter-paramedics arrived six minutes after the dispatch. A Sheriff’s deputy had spoken to the occupants and verified the location of the woman. He directed firefighters to a front bedroom. Crews deployed multiple handlines to the building and placed a ladder in the bedroom window. They entered the bedroom to search for the woman when the bedroom flashed over with fire blowing out of both windows. Firefighters narrowly escaped by diving out of a window.

Two firefighters suffered non-life threatening burns. Crews worked for about 30 minutes to contain the blaze. They located the woman in a front bedroom, and she had no signs of life. The Coroner’s Office was contacted. The 24-year-old woman was treated by firefighter-paramedics for smoke inhalation and was transported by Fire-Rescue Medic 26 to Colleton Medical Center.

Fire units were on the scene for 4 hours. The cause of the fire appeared to be electrical in nature. The occupants advised the home had electrical issues and Fire-Rescue had responded to the location for electrical problems in the past. Although the home was heavily damaged in the fire, two rooms were saved with little damage to the contents. The Red Cross is assisting the family.

A Prairie Lane residence in Colleton County SC, was destroyed in an evening fire Monday night 14-March at 20:45. The homeowner advised he’d heard noises and opened the back door to find the rear porch engulfed in flames. He was able to get the family safely out of the home and notify 9-1-1.

Colleton County Fire-Rescue Car 103 arrived to find the single-family dwelling fully involved, with the roof already collapsed in the center. Engine 19 deployed multiple handlines and used the deck gun on the fire. Firefighters had the blaze under control in about 30 minutes, but were on the scene for three and half hours performing overhaul. Water supply was handled with renders.

Two vehicles parked near the home were damaged, and two rooms on the north end of the building were left standing, but the interior of the rooms were gutted. The remainder of the home was destroyed and the family lost all of their belongings. The Red Cross is assisting the family. The cause of the fire appears to be electrical in nature. No one was injured. 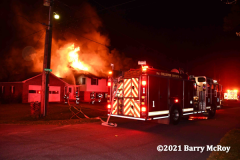 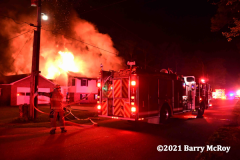 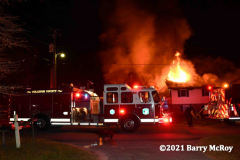 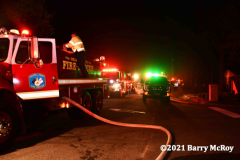 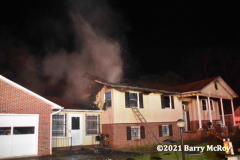 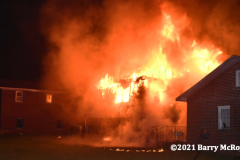 At 04:35 Tuesday morning 09-February, Colleton County (SC) Fire-Rescue units were dispatched to a structure fire with possible entrapment in the 100 block of Ann Court near the City of Walterboro. Engine 26 arrived to find the single story wood frame structure approx. 70% involved with heavy fire showing throughout the structure. The roof had already collapsed in the rear of the building.

Firefighter-Paramedics deployed multiple hand lines to the buildings and one team was able to enter a front room through a window to perform a quick search of the room. They were unable to locate anyone in the room and were driven out by the intense heat. One firefighter received non-life threatening second degree burns to his shoulder and back, but denied ambulance transport to the hospital.

Crews aggressively worked the fire and had the bulk of the flames knocked down within 15 minutes. They were able to reenter the building and search for a victim. Neighbors advised the single occupant should be in the building. Sadly, crews located the adult female’s body in the bathroom toward the back of the structure. The Coroner’s Office and State Police Fire Investigators (SLED) were notified. Both agencies, as well as the State Fire Marshal’s Office responded.

The fire appears to have started in the center of the home in what a neighbor advised was the living room. Firefighters worked for about two hours performing overhaul and remained on the scene assisting SLED throughout Tuesday morning. The cause of the fire is under investigation.
Engine 1, Engine 26, Engine 27, Tender 1, Tender 19, Tender 26, Tender 27, Medic 19, Medic 26, Battalion 1, Car 105, Car 112, Car 118 and Car 119 responded. Battalion Chief Brent Dalton served as Incident Commander.

One man was transported to the hospital and a family was displaced after a fire occurred in their home at 25 Twin Oaks Lane north of Walterboro (SC), Wednesday night 18-December. At 23:15, 9-1-1 was notified of the fire inside the building. The caller advised the fire was in a bedroom, but everyone had safely exited the residence. Colleton County Fire-Rescue Engine 19 arrived minutes later to find smoke coming from the singlewide mobile home and fire visible through a bedroom window.

Firefighter-Paramedics deployed two handlines to the building and forced entry through a rear door. They were met with heavy fire conditions as flames exited through the utility room. Crews were able to quickly knock down the flames and enter the structure, containing the fire to the bedroom. The remainder of the home suffered smoke and heat damage, but many personal items, including many Christmas gifts were saved. The master bedroom and adjacent utility room received substantial damage.

The occupant advised she was awakened by a popping sound, just prior to the smoke alarms alerting. She found the bedroom on fire near a space heater. She woke the other occupants and gathered a baby from another room and all of them safely exited the home into the 25 degree night. They sat in a vehicle to stay warm. Firefighter-Paramedics treated an adult male for respiratory problems resulting from smoke inhalation. He was transported in stable condition to Colleton Medical Center by Fire-Rescue Medic 26. Crews had the fire under control within 20 minutes and were on the scene for 2-1/2 hours performing overhaul. The fire appears to have started near a space heater in the master bedroom. It was one of four space heaters in use at the residence. Water supply was conducted with Tenders. The Red Cross is assisting the family.

At 18:54 on 12/12/19, a passerby reported to 9-1-1 that a building on the property of Clean Management at 915 Industrial Road north of Walterboro was on fire, with flames coming from the building. Colleton County (SC) Fire-Rescue Engine 19, stationed less than a mile away, arrived within minutes, to find heavy fire conditions in a storage and processing building. Most of the structure was a large open air canopy style building used for storing and neutralizing industrial waste. The building also contained several offices, file, and break rooms. The building contained hundreds of 55-gallon steel drums and plastic containers of varying products. First arriving units requested a second alarm, then deployed multiple 2-1/2 and 1-3/4 handlines. Two drop tanks were set up for water supply with tenders shuttling water for the firefighting effort. Firefighters cut a section from the fence surrounding the property to gain access to the building and forced entry through the front and a side door.

Crews worked for 40 minutes to gain control of the fire and were at the scene for five hours performing overhaul. Much of the product was saved, but the building suffered extensive damage. The area over the offices also received heavy damage, but the interior of the building was saved, receiving mostly smoke and water damage. Several pieces of heavy equipment were also destroyed or damaged in the fire. Two firefighters were transported to Colleton Medical Center for evaluation following exposure to one of the substances, upon the recommendation of Chemtrec. Both were treated and released the following morning. Viewing surveillance video, it appears the fire started near a piece of heavy equipment parked in the middle of the facility about 30 minutes after the business closed. The fire quickly spread from there to the other parts of the building.