Chicago Engine Co. 38 landed with a fire in a vacant 3-sty “Red X” building at 1259 S Homan Ave. They had heavy fire throughout the rear of the building and extending up to the third floor. Battalion 14 requested a Still & Box and transitioned the companies to go defensive. Tower 14 & Squad 1 used their master streams and pretty much knocked most of the fire. Engine 23 fed Squad 1 from the rear, and Engine 44 fed Tower 14 from the front. 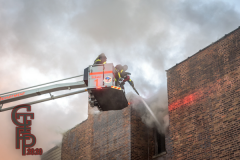 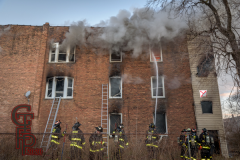 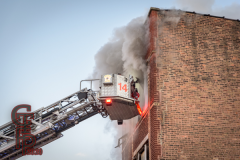 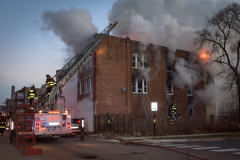 Images from a Still & Box Alarm fire in Chicago’s 7th Battalion during September of 1989. As I arrived, I was afraid that I’d missed everything as the fire appeared to be out on the first floor. I was in the right place though when they vented the roof and void spaces that were charged. Chicago firefighters on the roof of a house in the 7th Battalion in September of 1989. Larry Shapiro photo Smoke pushes into the gangway between the houses as a firefighter vents the roof. Larry Shapiro photo A fireman pulls the soffit as two others prepare to hit the fire from a ladder. Larry Shapiro photo A handline goes to work from the front yard. Larry Shapiro photo After the heavy fire was knocked down, there was still fire in the void space behind the roofing material. Larry Shapiro photo