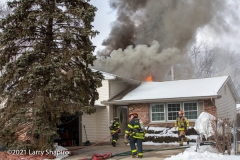 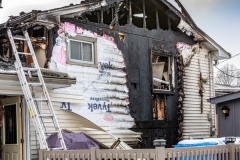 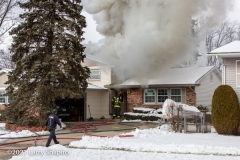 Buffalo (NY) firefighters responded in the late afternoon of October 25, 2014 to the intersection of Walden Avenue and Genesee Street after Fire Alarm received several calls reporting a structure fire. Arriving crews reported heavy fire from a two and one half story wood frame at 5 Walden Avenue. An extra two engines and one ladder were called for, followed shortly by the balance of the second alarm. High winds helped spread the blaze to adjoining structures at 1 and 3 Walden Avenue. Firefighters fought the fire defensively using three tower ladders, three Blitz Fire nozzles, and four 2 1/2″ handlines. An excavator was brought to assist in overhaul. Damage was set at $250,000. The cause is under investigation. more photos are at www.wowmephotos.com